Solar battery currently mainly use silicon solar battery, which dominate in the area of applications.Silicon solar battery are composed of large-area PN junctions made of silicon semiconductor materials in series and parallel. On the N-type material layer, a metal grid line is made as a contact electrode, and a metal film is also made on the back as a touching electrode, forming a solar battery panel. In order to reduce the loss of light emission, a layer of anti-reflection film is generally covered on the surface. 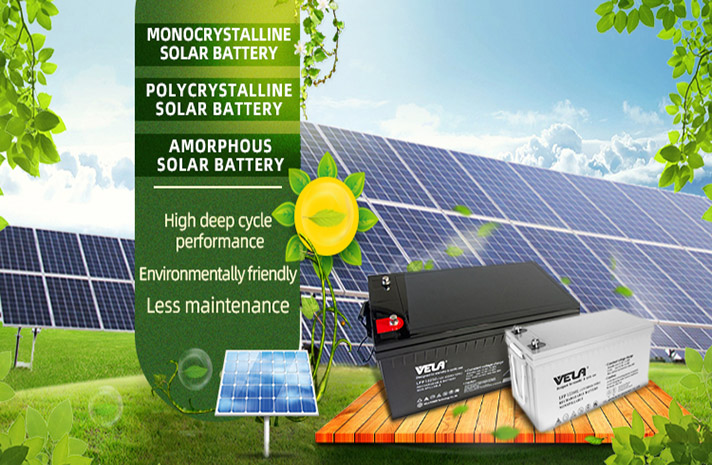 Amorphous silicon solar cells have low cost and good low-light effect, but the conversion efficiency is less than 10%, the service life is short, and the material with poor stability can easily cause the photoelectric efficiency decline effect, which affects on its actual use.

2.Use of solar battery

Solar battery are generally not used single, and need to be equipped with photovoltaic controllers and batteries to form a set of solar power sources. Solar panels are the core part of solar photovoltaic power generation systems, which convert solar energy into electrical energy, usually using monocrystalline silicon or polycrystalline silicon panels. Due to the long service life (generally up to 20 years) and high photoelectric conversion efficiency, monocrystalline silicon batteries are the most commonly used batteries. The photovoltaic controller mainly protects the battery, with overcharge and over-discharge protection, power output control, charging trickle protection, temperature compensation and lightning protection functions. When the solar panel is charging to the battery, if the battery voltage reaches to the peak and the high-voltage charging is continued, it is easy to cause damage to the battery; but if the charging is stopped at this time, the battery cannot be saturated; so the controller will immediately reduce the voltage after charging to the peak voltage, and then enter The state of trickle charge ensures that the battery can be stabilized in a full state and  effectively protects the battery and makes its life longer. The storage battery stores the electrical energy converted from solar panels, and usually uses lithium batteries or lead-acid batteries. Since the electricity generated by solar battery is direct current (DC), if you provide electricity to household appliances, you need to install an inverter (direct current to alternating current)